I usually shoot with a 16-35mm or a 70-200mm. However, when I know I am going to be getting a chance to photograph wildlife, like Brown Bears in Katmai, I bring along something longer. Shot on location in Katmai National Park, Alaska, USA.

Keep your eyes peeled for an announcement on an exciting Katmai event coming soon!

Can One Person Really Make A Difference?

Can one person really make a difference? Rachel Carson did – she wrote the book Silent Spring just over 50 years ago in 1962 which woke up the American public to the fact that we were killing off our wildlife at an alarming rate – with many on the brink of extinction. Despite the claims and disinformation of the chemicals companies she laid out the scientific proof that DDT was responsible for the decline in birds of prey. Her book and public awareness ultimately lead to the Endangered Species Act signed into law in 1973.

Each of the animals in this album would have been extinct by today had it not been for the Endangered Species Act turning their fate around.

American Alligator – nearly gone by the 1960s for their skins to produce purses and shoes, protected in 1967, they were removed from the list just 20 years later after a hearty come back.

Whooping Cranes – hunted for their feathers for fashion there were only 16 birds left in 1941. In 1967 under the act’s protection the few remaining birds were rounded up for captive breeding and today several hundred exist in the wild.

Bald Eagle – By 1963 there were just 417 breeding pairs in the lower 48 due to DDT, today there are over 10,000 and you no longer have to go to a zoo to see our nations symbol. Likewise Peregrine Falcons are doing well with many taking to the skyscrapers of large cities to raise the next generation while preying on pigeons.

Grey Wolf – virtually extinct by the 1930s due to hunting, protected and reintroduced into Yellowstone in the 1970s there are an estimated 5,000 wolves in the lower 48 today.

Californian Condor – In 1987 the last 22 Condors were captured in the wild for captive breeding and today around 200 live in the wild. Alive, but still one of the rarest birds on the planet.

This past week I was in Katmai National Park photographing brown bears with filmmaker Abraham Joffe. The bears were wonderful, cooperative models for us & I can’t wait to see the resulting TV special.

Sockeye salmon run thick in the rivers and streams of Katmai.  However, these fish are smart.  I was unable to capture the shots I wanted of the fish since they were very agitated by the bears hunting them.  The bears work in unison, churning the water, then snagging the confused fish in their powerful jaws.

Katmai National Park is one of my go-to places for bears. It is extraordinary to say the least & the scenery isn’t too shabby either. In particular, I was able to photograph a sow & her two cubs. She looked at me, looked at her cubs, and sat down as if giving me permission.

Walking into my first Art Wolfe Workshop, I was a self-taught photographer, anxious and concerned I may not keep pace. Within minutes I was diffused. Fast forward seven seminars/workshops and I find myself standing next to Art ready to board our small plane heading towards Coastal Brown Bears. If I knew then, what I know now, I would have taken the opportunity long before my first.

He has treated me as a friend; given knowledge and support peppered by encouraging opinion. He has shared; I have tried and failed and he has tirelessly shared again. He has crept into my brain, opened my eyes and opened my world. I have grown. For that I am thankful.

Once again we experienced tremendous photographic opportunities with the bears at Alaska’s Lake Clark National Park. Here are some of the picks our fellow travelers and photographers took!

Jim Waterbury www.jimwaterbury.com
“Thanks for a terrific workshop! What a treat to see the magnificent coastal brown bears up-close, interacting with each other in a natural setting, and seemingly oblivious to the presence of humans. As usual, I found Art’s artistic vision, passion, and vast experience photographing wildlife to be both inspiring and educational … a real privilege to have been able to spend 4 days with Art and Jay, in the wilds of Alaska, yet in a very comfortable environment. Looking forward to the next opportunity! Thanks!”

Hanspeter Leupin
“Taking pictures of the bears was an absolutely amazing and breath taking experience. With the input I got from Art and Jay I learned to enhance my skills in taking pictures.” 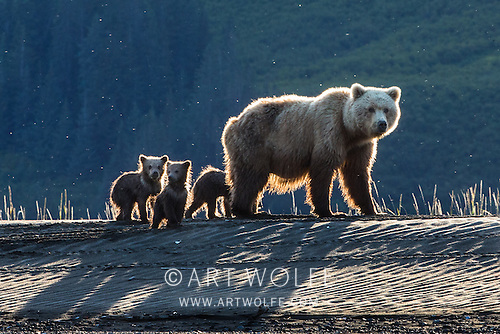