And for those of you, who don’t read German (like me), Knesebeck Verlag is publishing an updated version of Vanishing Act, originally published in 2005.  Now with more photos, captions, and a new design!

See more of the layout HERE. 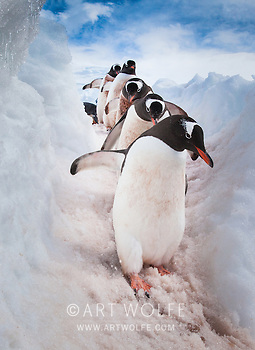 Start next year on a high note!

It is exhilarating – the first moment you step off the ship. Suddenly there is nothing between you and Antarctica. Hundreds of miles of land, snow and ice. You get a sense of how early explorers must have felt stepping off into this vast wilderness – the thrill of the unknown: the adrenaline rush of true exploration, adventure and awesome photography.

It is one thing to visit a place but it is another to immerse yourself in it. To not just see the sights but to understand the history, get to know the wildlife and come home with many iconic photos and unforgettable memories.

I am leading this photographic workshop, which offers you the most in-depth exploration and photography of the Antarctic mainland. Extended time in the region allows you to go beyond the Antarctic Peninsula and venture south of the Antarctic Circle, home to fantastic ice formations and wildlife including the Weddell seal.

There are five more days to enter your photos to the Por El Planeta Photo Competition, with a grand prize of $100,000 to be put toward a conservation photo project.

Por el Planeta is not just a photography contest, it’s a movement seeking to transform our relationship with the planet and its wildlife. The competition was born out of a desire to reaffirm narrative photography as a powerful tool that encourages nature conservation and generates an appreciation for biodiversity.

Por el Planeta will award more resources than any other photography contest to recognize the dedication, skill and talent of photographers who strive to create images that infuse society with an understanding of and care for our shared natural heritage. At the same time, Por el Planeta wishes to encourage the development of new photography and conservation projects, mobilize audiences and raise awareness of the daily threats faced by our biodiversity.

•    Por el Planeta is a Wildlife, Nature and Conservation Photo Competition organized by  Televisa, the Mexican government and National Geographic as a mission partner.
•    Por el Planeta will allocate over $300,000 US in prize money for the winners.
•    All profits will be donated to conservation initiatives.
•    Submissions close date: March 27, 2015

For more information and to enter, visit porelplanetaphoto.com

Most recent photos from Art in Rajasthan!

Norbert Rosing will be joining my Svalbard trip!

I have some terrific news for the Svalbard tour coming up in August. National Geographic photographer Norbert Rosing will be coming along!

Sign up by March 17th to take advantage of the early bird special pricing!

If you are flying on an Alaska Air flight this month, make sure to browse through the magazine in the seat pocket!

I do think it is great that I am in the issue that Russell Wilson is also featured in. Unfortunately, I think my staff was more excited for the Russell Wilson article than mine!

If you are not going to be traveling on Alaska this month, they also have a digital edition of their magazine.

Holi, The Festival of Colors

Holi has brought me back to India. We experienced the Festival of Colors in the ancient Vrindavan temple near the city of Mathura. I am happy to say the cameras survived, covered in rain guards.

Celebrated all over India since ancient times, Holi is an annual festival which takes place on the day after the full moon in the Hindu month of Phalguna. Originally Holi was an agricultural festival celebrating the arrival of spring. In keeping with this tradition people now choose to celebrate the occasion by throwing brightly colored spices or herbal powders into the air. Symbolically they are ridding the gloom of winter and rejoicing in the colors and liveliness of spring.

Using Elements of Design: When I photograph, I am always looking for elements of design such as line, pattern and texture, as visual queues. Shot on South Georgia Island.