Much has been made of the Kumbh Mela lately because it is such an extraordinary event – a mass Hindu pilgrimage, largest in the world. Each Kumbh, tens of millions of pilgrims descend upon one of four Indian cities to celebrate and bathe in sacred rivers.

The location for the Kumbh Mela rotates each time, roughly every three years, with smaller celebrations occurring at each city during various off-years. These dates are dictated by the Vikram Samvat,  or historical Hindu calendar.

I’ve had the pleasure of visiting during this spectacular event multiple times throughout my career:

This visit to Kumbh Mela ended up producing one of my most popular images – Spiritual Journey.

This occasion was a “Maha” or “Great” Kumbh Mela – over 120 million people attended!

If you’re ever able to attend this historic spiritual event, it’s well worth the trip to witness the spirituality and dedication of the pilgrims who attend. Though popularity and exposure has risen over recent years, it’s a sacred event that exemplifies spirituality through the dedication and sacrifice. Rarely seen in the public eye, the Kumbh Mela offers a rare chance to witness the emergence of the sadhus, or holy men, who spend most of their lives in isolated meditation and deprivation who come and further display their dedication through discomfort as they bathe in the melted glacial waters of their sacred rivers.

An upcoming Ardh Kumbh Mela takes place this year in Allahabad (officially known as Prayagraj), and the next Kumbh Mela will happen in 2022 at Haridwar. After witnessing the amazing percolating crater of Nyirangongo Volcano and Virunga’s mountain gorillas, we flew to one of Tanzania’s most remote and rarely visited parks, Katavi National Park. Here in the dry season the Katuma River slows to a trickle and becomes the only source of drinking water for miles around. Wildlife in unbelievable densities is forced to converge on the riverine pools. Already the most dangerous animals in East Africa, hippos erupt in territorial disputes and crocodiles lurk nearby in an uneasy truce. This is one of the few places I have been where so many huge, dangerous animals have been so concentrated. In the midst of it all, an annular eclipse occurred, which seemed a sideline to this gritty wildlife spectacle. To answer your question: the crocodile did manage to wriggle away to safety.

Announcements, On Location, Travels To The Edge, WildlifeAfrica, TanzaniaArt Wolfe

Travels to the Edge: Music in the Antarctica Episode We often get asked about the music that is featured in Art Wolfe’s Travels to the Edge episodes. Here is a list of composers and musicians featured in Antarctica and the Falkland Islands. Many of them don’t have websites, but you can find their music on various internet music sites.

Audio, Travels To The EdgeAntarcticaArt Wolfe

Travels to the Edge: Music in the Japan Episode 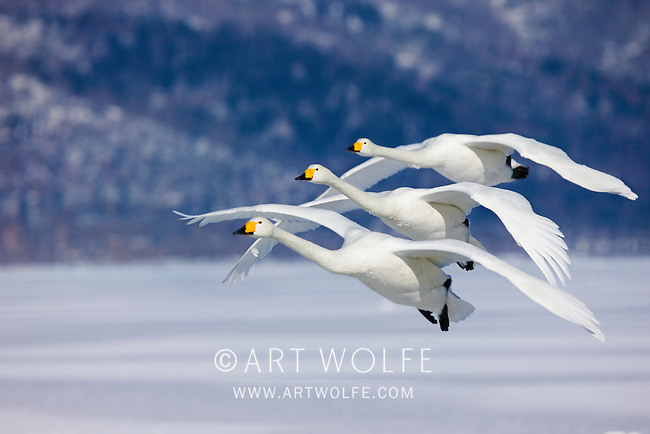 Here is a list of composers and musicians featured in Japan: Hokkaido and Honshu. Many of them don’t have websites, but you can find their music on various internet music sites.

Audio, Travels To The EdgeJapanArt Wolfe Audio, Travels To The EdgeAustralia, Travels to the Edge MusicArt Wolfe