First published in 2004, the Smithsonian Answer Book: Cats in Question is now available as an eBook.

Done in question-and-answer format Cats in Question offers authoritative and engaging answers to the thousands of questions about cats that Smithsonian scientists receive annually. All of the world’s cats are here, from fearsome predators such as lions and tigers, to mysterious hunters such as leopards and jaguars, to cuddly pets such as domestic cats.

More than 100 breathtaking photographs by acclaimed photographer Art Wolfe illustrate the questions on cat facts, cat evolution and diversity, and cats and humans. Readers will find the answers to such questions as “What are cats?” “How do cats hunt?” “Do wild cats like catnip?” and “Do cats dream?”.

Subjects dealt with include physical features and senses, diet and predation, social behavior, evolution, decline and recovery, diversity, distribution and abundance, and the cats’ roles in various cultures. Did you know that a male and female lion mate repeatedly, as often as every 20 minutes for several days? Or that lions may sleep or rest up to 19 hours a day? The text is augmented by 120 color photographs and a list of scientific and common names and a glossary.

Quest for the Snow Leopard Part 1

Nestled in the Indian Himalayas Ladakh is one of the best areas to see the elusive snow leopard. I am also getting to know more about the people who live here, and taking in the spectacular scenery and other wildlife.
The first couple days we spent in Leh getting acclimatized to the high altitude before heading out on our snow leopard expedition. The city and the surrounding valley and mountains are home to many imposing palaces and monasteries.

On Location: I Gatti della Toscana 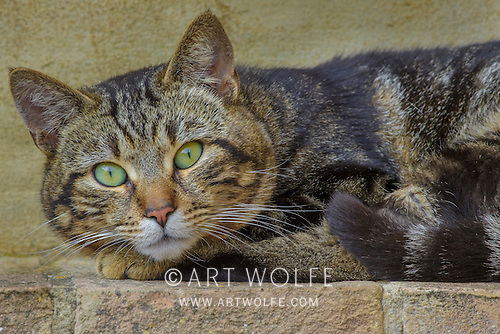 I captured this 20 second video on my recent trip to Bhutan with a Canon 5D Mark II camera.