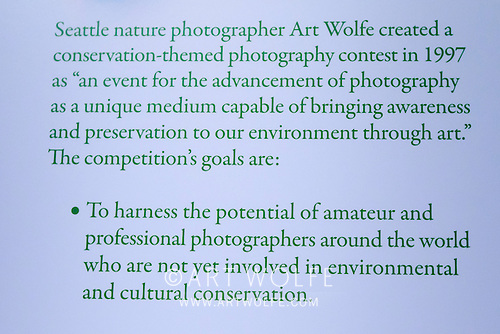 This is the last month to go and visit this great show at the BURKE MUSEUM. The show ends on November 25th.

I recently revisited the show and took a few candid shots of the exhibit. I continue to be impressed with the content of the images and the overall high-quality of this well designed show. Lots of school children have visited the show and there was a group in the museum when I was there. The kids loved it and were very attentive and interested.

You can look at the images online, but I highly recommend a visit to the museum for the full exhibit experience. It is really worth it!

Join the Burke Museum at the Neptune Theatre for an evening of fast-paced talks on the enduring relationship between the human imagination and the natural world. Inspired by the International Conservation Photography Awards exhibit, Short Takes features a stellar lineup of artists, scientists, students, and scholars. Speakers include internationally-renowned photographer Art Wolfe, curators from the Burke and the Seattle Art Museum, and explorers of the seas and the stars. Ten short talks, each illustrated with 20 slides, will take us on a journey from humanities’ first artistic impulses to our latest glimpse into the far reaches of space.

Short Takes is produced in conjunction with Seattle Theatre Group with support from the Boeing Employees Credit Union.

Have a look at this beautiful show online:
>>ICPA GALLERY

This is a reminder to be sure and get over to the Burke Museum and see the ICPA (International Conservation Photography Awards) show. They have had great turnout for the show this year. It is both beautiful in its presentation and valuable in its conservation message. Take the whole family. Kids totally get this. Photographers are also interacting with the Conservation Candids. This is an interactive Flickr gallery that anyone can contribute a like-minded image to. The Burke Museum even has prizes if you enter a photo.

The show runs until November 25.

June 30 – November 25, 2012
The Burke Museum will once again exhibit the winners of the International Conservation Photography Awards, a biennial juried competition initiated in 1997 by acclaimed local nature photographer, Art Wolfe.
Over 75 photos were chosen from more than 1500 images submitted by amateur and professional photographers from across the globe. The photographs are conservation-focused, chosen in categories such as Wildlife, Landscape, Underwater, and Community at Risk, which focuses on environmental threats to urban areas. Capturing beautiful moments in the natural world, the photos connect us to the tiniest of creatures and enormous environmental changes. The competition and its award-winning photos inspire, educate, and encourage us all to consider our impacts on the world’s natural resources.
A panel of five judges selected winning photographs in each of the nine categories. The winning photographs will be announced on Opening Day, June 30. Four of the honored photographers will speak about their work, photographic techniques, and passion for conservation on the hour between 11 am and 2 pm on June 30. Judges from the panel will offer visitors guided tours of the exhibit. Check the Burke Museum’s website for a full schedule and details.
For the first time, the Burke and the International Conservation Photography Awards will also collaborate to create a traveling exhibit, which will include the top 25 first- and second-place winners.
The 2012 International Conservation Photography Awards exhibit is organized by the Burke Museum in partnership with the ICP Awards. The exhibit is sponsored by 4Culture and the Seattle Office of Arts and Cultural Affairs, with support from Kym Aughtry, Hugh and Jane Ferguson Foundation, The Mountaineers Foundation, Carl Skoog Memorial Fund, U.S. Bancorp Foundation, and the Peg & Ric Young Foundation.

Link to this release: http://www.burkemuseum.org/info/press_browse/2012_ICP_awards_exhibit

Galleries of the winning photographs will be viewable on June 30. Visit ICPA Website.

Kah Kit Yoong is a Melbourne-based travel and nature photographer. His background includes studies and qualifications in medicine and music. He was introduced to photography in 2005 while exploring the cobble stone streets of Italian towns. Later that year, he developed his skills while tramping the pristine wilderness of Tasmania. Kah Kit’s appreciation of the world’s wild places has inspired him to capture its landscapes. He has been widely published in numerous magazines, including National Geographic, Popular Photography and Nature’s Best. His work has been awarded both in his home country of Australia as well as in the UK and USA. This year he was a prize winner in the landscape category of the International Conservation Photography Awards, as well as receiving an honourable mention in the wildlife section. To view more of his photography visit his website www.magichourtravelscapes.com. News and more articles can be found on his new blog www.magichourunplugged.com.

Havana – a city of faded glories but still elegant in its decaying state. Nowhere is this more evident than the Prado, a marble-tiled, tree-lined avenue, surrounded by crumbling facades. It leads to another prominent feature of Havana, the Malecon, a roadway and seawall which stretches for 8 kilometres along the coast. In the afternoon, it will become a hub of activity for tourists and locals engaged in banter, people-watching, playing musical instruments or fishing. But this is dawn; the streets are almost empty save for the occasional vintage American car cruising past and the city is yet to rise from its slumber.

As I stroll down the Prado, I consider my options for my sunrise shoot. No doubt the Malecon at the end of the avenue would be an appealing subject. The rain clouds, responsible for the many puddles on the streets are starting to disperse and take on a pinkish hue. I am distracted by the brightness of some buildings at the end of a side street. The warm glow of sunrise is starting illuminate the taller buildings in the distance and my plans to proceed to the sea is abandoned in favour of exploring this part of the old city.

Very soon, I come across a beautiful green 54 Chevy. The building behind is in a state of dilapidation, rough exposed bricks showing where a facade had been stripped off. I shoot a few frames of the car juxtaposed against the bricks but what I really want to do is incorporate some of that gorgeous light filtering through the city. When I turn the corner, an even more striking red Chevy awaits, shiny and glistening with droplets after the overnight rain. This time, the effect of the first direct rays of the sun can now be seen on the distant buildings. My tripod is soon set up and I carefully make a composition. Several locals have stopped to watch me and a man in a blue T-shirt across the street appears staring intently at me. I take a few exposures, with shortening shutter speeds to make sure he is frozen in the frame.

I had heard that Cuba is a country seemingly in a time-warp, decades behind the Western civilization. Recent reports indicated that this would soon change. Hence, the time seemed ripe for a visit and I spent 12 days traveling around the country in 2009. It was a departure from the nature-based photography that I’m more familiar with. I knew that it would present an opportunity to shoot a wide range of subjects, extending my comfort zone and skills as a travel photographer.

One of the differences between a tourist and a travel photographer is the mindset in what they are trying to achieve with their images. The former usually takes photographs to preserve memories of the place as a way to document that they have been there. Their shots tell us the story about their trip. Travel photography, on the other hand, is about telling the story of the place. This may be from the photographer’s eyes but the best images feel as though we are seeing the place through those of a local. I don’t believe that you can truly capture the essence of a location in a single photo, but with a portfolio of images I think that is achievable. Certain images may go a long way in revealing the broad character of a place while others may only focus on very specific details. However seeing the images as a visual storyboard, the viewer should be able to get a good feel for the location, replacing the words of a description like the one above.

Since taking up photography, I have found that my senses are heightened when exploring a new city or country. I notice things on a grand scale as well as those small details that might have eluded me previously. There’s a process of deconstruction that I run through mentally : city, skyline, buildings, doorways and bricks. Or perhaps : traffic, car park, car, driver, bonnet, wheel, windows, etc. All of these may make suitable subjects in their own way. At the end of it all, by putting the images into a portfolio, the pieces are reconstructed to form a cohesive representation of the whole. I also find that photographing a wide cross-section of my subjects to be a useful and rewarding endeavour. As an example of this approach, when shooting portraits, I was sure to include both sexes in all the age groups : children, teenagers, adults and the elderly. The people of Cuba were very friendly and open to having their portraits taken so this became a major part of my portfolio.

Planning a shot list is an important part of putting together a visual storyboard. These may include specific subjects. My list for Cuba would have looked something like this : vintage cars, side streets, cobblestones, peeling facade, old men playing boardgames, doorways, rocking chairs, Malecon at sunset, musicians, instruments, hands, cigars, person smoking, factory worker, Coco taxi, farm animals, architecture, etc. Some of these are quite specific while other like cars are less so and benefit from a broader approach. I ended up with numerous Chevy images, including wide shots from numerous angles while other images focused on various components of the cars. For a different perspective, I took a few from a viewpoint behind the driver and experimented with panning moving vehicles as well as using slow shutter speeds while sitting in a Coco taxi to convey movement and speed. Other items on my shot list included concepts, ideas or feelings. Some examples : children having fun, rhythm, energy, the simple life, decay. Periodically, I made time to review all the photos that I have taken. I recall doing this the night before my last full day in Havana and realized that none of my images adequately conveyed ‘decay’. The afternoon, while exploring the old town, I pushed open the door to a set of apartments and found the exact scene I was looking for. It required some discipline not to photograph the brilliant sunset over the bay but from my image review the night before, I knew that I would have been going over old ground. It was with great satisfaction that I was able to shoot this last scene on a dilapidated staircase, knowing that it completed the story I wanted to tell about Cuba.

Nice articles on the ICPA exhibit & Art at the Burke: