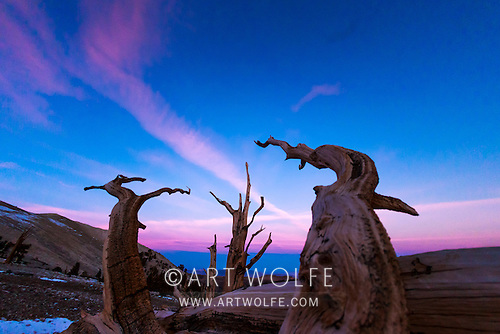 We had a very successful workshop in and around the environs of Bishop, California. The weather was chilly and moody, but cooperated. The intermittent rain, snow and wind created the drama we needed. It is a fascinating region, full of photographic possibilities. One day we were set up amidst the ancient & twisted Bristlecone pines at 11,000 feet and the next we passed through the ghost town of Bodie on our way to the surreal tufa formations of Mono Lake.

I rarely do assignments, but recently I traveled to California to do a shoot for the award-winning winery Sequoia Grove .  It is a wonderful winery in Napa which has a partnership with the Sequoia Parks Foundation to protect habitat for the magnificent trees.

Following the commercial shoot in Napa, Jay Goodrich & I headed to the ghost town of Bodie, a State Historic Park north of Yosemite National Park. An old gold-mining town that was abandoned by its last residents over 50 years ago, it offers terrific photographic opportunities of “arrested decay.”

The open road of the Eastern Sierra beckoned after a quick stop in  Yosemite, and we caught Owens Lake at sunset.  Most of the water from the Owens River has long since been diverted to the Los Angeles Aqueduct, but some flow has now been restored to the lake.  At dusk when the shallow, alkaline waters are still, the reflections of landforms and the endless high plains sky are superlative.

Back in the Bay Area we rented a small plane and flew over the San Francisco Bay.  Over 90% of the Bay’s marshlands have been lost, but now some areas are slowly being restored for wildlife habitat.  From the sky, the marshes offer amazing array of abstract geometric patterns and colors.