The Amish of Lancaster County 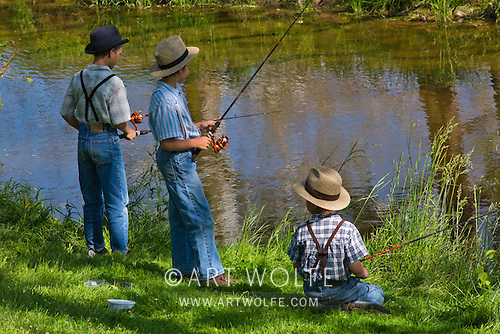 A day among the Amish
Lancaster, Pennsylvania

Traveling the world I have visited cultures from remote tropical jungles to arid African savannas where living a simple existence is dictated by the lack of natural resources. The people simply must pull a substance living out of the land to survive, a way of life that does not come by choice but by necessity. In between seminars in NY and Philadelphia, I had the opportunity to photograph the Amish of Lancaster County, an interesting contrast to see a culture living a simple existence surrounded by all manner of modern conveniences and technology while doing without all of these trappings not because they have to, but because they choose to.

Photographer and friend Tim Mateer acted as my guide over a couple days; a Mennonite himself, he was able to provide insight into this unique culture that dates back to 1693 when a group branched off from the church in Switzerland led by Jakob Ammann. Those following Jakob became known as Amish and in the 1720s several groups migrated to Lancaster County, Pennsylvania where their decedents still live today. While many think of this as “where the Amish live” separate communities can be found in over half the states in the US and even in Canada. And they are anything but a leftover dying breed, having an average of 7 children they are among the fastest growing populations today with numbers now exceeding 250,000. As they only marry within their faith genetic disorders are high despite their own efforts to marry into different, unrelated communities.

While the Amish live and work on their own farms they share the same public roads and do not try and hide themselves. To the contrary I found them to be quite friendly; the majority greeting me with a wave and a smile as I photographed them passing by. While in general they may prefer to be left to themselves in this area of the country they have become accustomed to tourists and our curious nature.

The Amish prohibition against being photographed isn’t exactly cut and dry. Though you won’t likely find an Amish person photographing or even painting a portrait of themselves adherence to and interpretation of biblical tenants varies wildly from one community to the next. Some are more relaxed, while others, the “old order Amish” are the strictest with prohibition of all things “worldly”. I suspect those I was interacting with were of the former, more relaxed communities of Amish though refusing to accept assistance from the outside or plugging into the electrical grid seem to be universal tenants.

The motivation behind their simple way of life comes from a strict and literal interpretation of the bible where it says one is not to be “conformed to the world”. In general they operate their own schools and educate their children through the 8th grade, young unmarried women teaching the children, this was determined sufficient for success in their way of life. Most are farmers though they are also well known for fine hand crafted furniture and quilts as well.

While the dress code varies among communities, in general they wear very plain clothes of solid colors, long dresses for the women, trousers and wide brimmed hats for the men. Within the community they believe everyone is equal and one individual should not stand out or be elevated above the rest. Women will not cut their hair wearing it in a bun under a prayer cap and the men’s long beards (they won’t shave their beard once married) are a sign of adult hood and maturity though mustaches were historically associated with the military and are forbidden.

The Amish are well known for their horse drawn buggies and wagons. They have begrudgingly compromised with the modern world agreeing in some places to place electric lights and reflectors for safety though they must be provided to them by local municipalities. With careful study of the buggies you can tell one community (generally 20-40 families) from another as there will be little variation, all being equal after all.

I found the Amish children to be just delightful and I smiled to see them being allowed to be just that, children. Granted I was just getting a glimpse but I what I saw were happy kids playing, goofing around, going fishing on the creek banks all smiles and innocence. I had to wonder to myself how different children in my own neighborhood might be if they spent more time outdoors being entertained by nature and their own imaginations as opposed to the internet, video games and TV.

I don’t pretend to know the Amish from my brief encounter and have neither judgment nor intimate knowledge of their ways of life. That said, a little fresh air and sunshine and working with one’s hands would no doubt do us all a little good in our over saturated technology driven lives. Now excuse me as I return to my Mac and work on some more images in Lightroom, gotta get them ready for the next presentation on the big screen and transfer some files for the Las Vegas gallery.